I haven't had a second to do any stamping lately, and Christmas is looming!  But, I had a couple of birthdays to make cards for this week-end, so out came my gear.  Recently I picked up a simple alphabet from Kikki-K and I played with that for these cards. 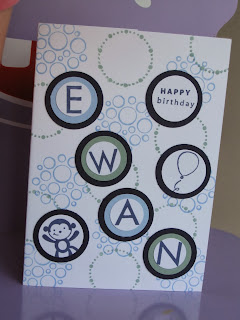 The first was a 3rd birthday for one of my little girl's friends - the party was yesterday and I put the card together in about 30 minutes just before we had to go, phew!  My little girl watched me make it and when it was finished she declared, "Oh, that's beautiful, Mummy!"  That put a smile on my face.  :-)
Colours are (all SU) Whisper White, Bashful Blue, Night of Navy, and Sage Shadow.


The second is a birthday card for my brother (who I don't think reads my blog, but if he does, "the card's in the mail").  This card emerged from an idea I had in my head that I had trouble translating to paper.  Although not what I originally imagined when designing the card, and due to the challenge of translating my concept to paper, I ended up with something different to my usual style, and I quite like it.
I can't get the picture to translate in a normal format (it is squishing it up), but you get the idea, I'm sure! 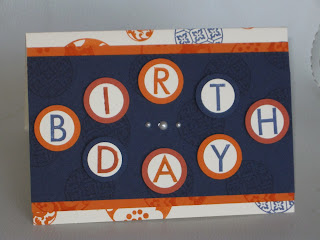 Colours used are (all SU) Very Vanilla, Night of Navy, Really Rust, Pumpkin Pie.
Sometime soon I will be blogging with some Christmas cards again.  Until then, I hope you've enjoyed my latest attempts at creativity.
Posted by Michelle at 21:03 1 comment:

Michelle
I love paper, colour, sparkles. I make cards. I play with paint, pens, and pencils. I take photos. I share my life with my two gorgeous girls. 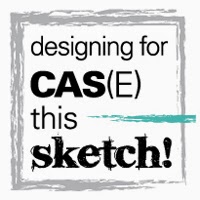