Just a quick one tonight. I'm already past bedtime, and fading fast!

The other day, I was looking at Chrissy Stokes' card, which is super gorgeous, and some vague ideas that had been circulating in my head formed into something concrete. Then I had to wait a day or two before I could make the idea into a card (if only I didn't need to go to work). The card(s) I made didn't live up to my imagination, but I think there is promise in the idea. ;-) 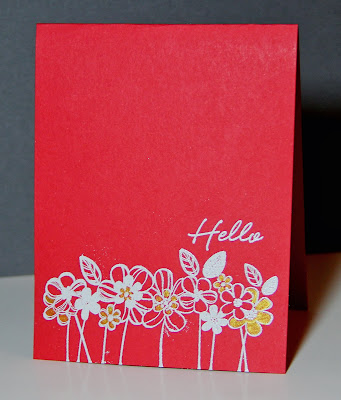 Card base is Poppy Parade. Stamps are Hero Arts Tall Flowers and Say It All. White embossing with Delicata Gold selective colouring.

I also made another one, which I had decided was too subtle, but now that I made the bolder one I am switching back and forth with my choice as to which one I like best. 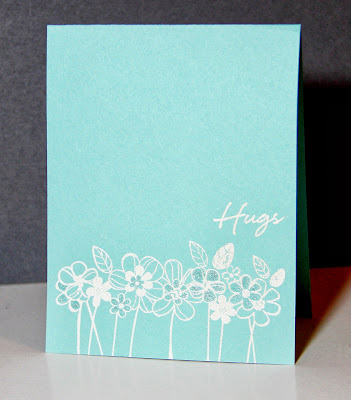 Card base is Pool Party. Stamps are Hero Arts Tall Flowers and Say It All. White embossing with Clear Spica pen selective colouring.

I am entering into CASology Challenge #44 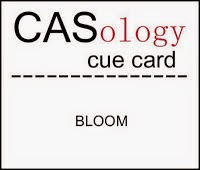 I am entering into A Blog Named Hero Challenge #24 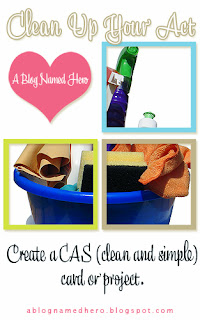 Also Less Is More Challenge #119 where it is one-layer week and we're asked to use a coloured card base.

And last, but not least, One Layer Wednesday #140 where we are making borders.

Four challenges for one simple card. I think that might be a record for me!

Oh, those flowers are so pretty embossed in white! Love both cards, Michelle!

Both fabulous cards Michelle, you rocked the one layer. Thank you so much for sharing with us this week at CASology!

Both of these cards are just beautiful. And, 4 challenge, too!

Perfectly clean and simple! Beautiful one layer stamping! So glad you joined us for the challenge at A Blog Named Hero! Have a great day.

Thanks for the shout out Michelle, these are super cards, I really like the second one... it's all great stamping!
Thanks so much
Chrissie
"Less is More"

Beautiful CAS cards, Michelle! I can't decide which one I like better. I think this one, mmm, no, that one, and back and forth. Both are winners and good for you for making your design work for all those challenges!!

Both cards are very pretty! You are rockin' all the challenges!

These are great - I can see a whole set of them (except that I can never get my white embossing this clean and I would end up emptying my cardstock into my recycling bin, I'm sure!) Thanks so much for playing along with us at CASology this week!

Love how the white embossing pops on the coloured card stock! Thanks for playing along with us at A Blog Named Hero.

Both are gorgeous - what a fun use of that stamp that usually goes all the way up the card!! That touch of gold on the red/white is absolutely stunning!

Michelle, I'm so glad you posted both cards, I love them both! The white embossed flowers really pop against the background colors. Wonderful! Thanks for playing along at CASology this week!

both cards are so pretty! I like how you used one stamp and created two completely different looks... bold and subtle. thanks so much for playing along with CASology!

Ooh, tough choice! They're both yummy! They're so pretty and delicate :)

These are just perfect Michelle, I'm so impressed with all the ways to use those tall stemmed flowers. Brilliant stamping :0)
Jenny x

Oh, these are both so beautiful, Michelle!

Your design works beautifully with both the bold and the subtle colour scheme.
Heather T

Both lovely. My eye goes to the blue one. Congrats on your shout out at ABNH.