I'm attempting to make a few sets of cards for a charity sale that my friend is running. It's for Alzheimer's Australia. I don't usually make sets, but making sets is a really wonderful way to explore a stamp set, or a colour scheme, or an idea.

Back in February, I pinned a card by Nichole Heady when she was introducing Building Blocks, thinking that one day I would use the inspiration. It turns out that I pretty much copied the design, but I loved the design so much, I didn't want to change it. The only change I made was to make it one layer and remove the twine. 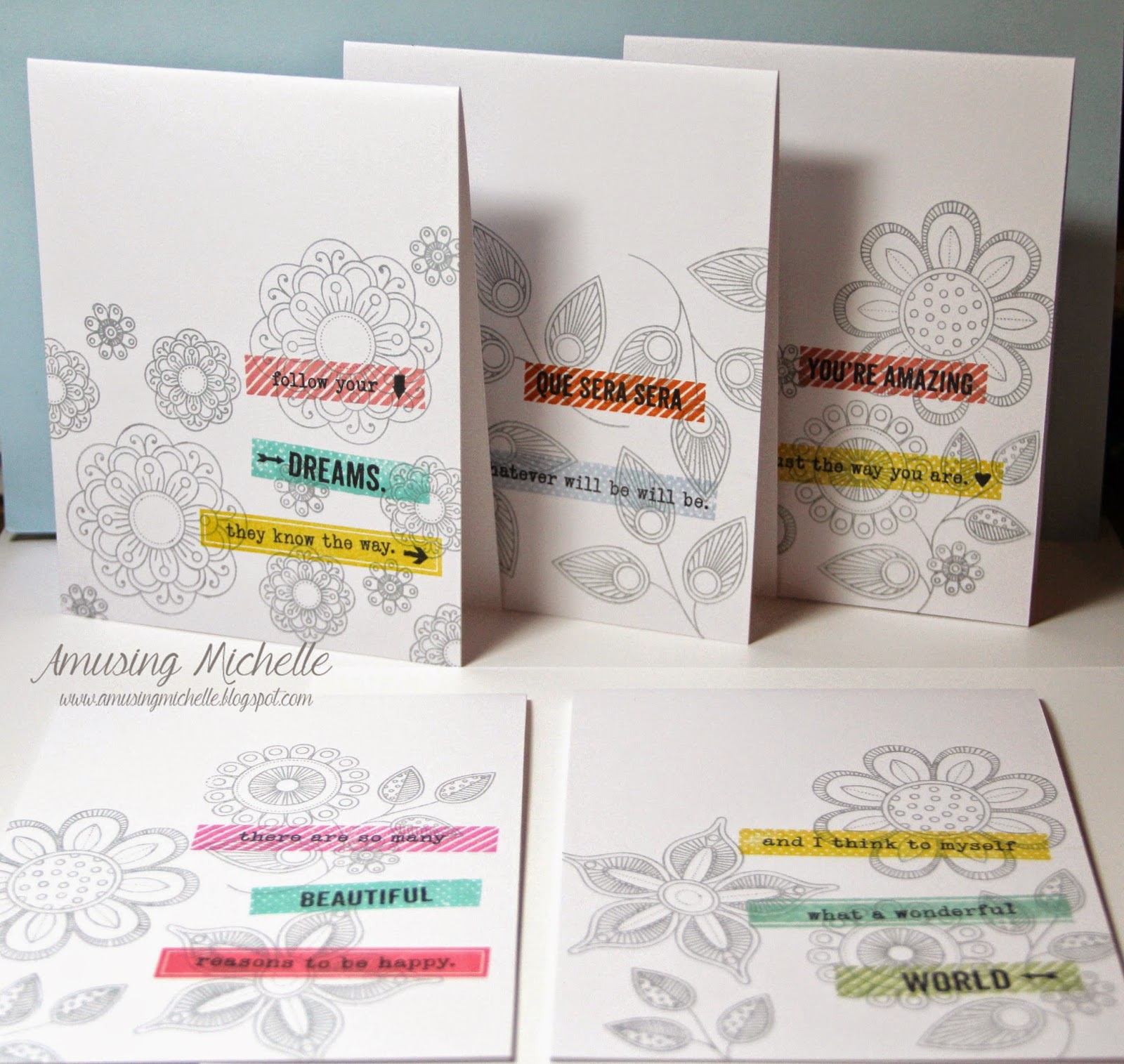 Nichole's card is this one: 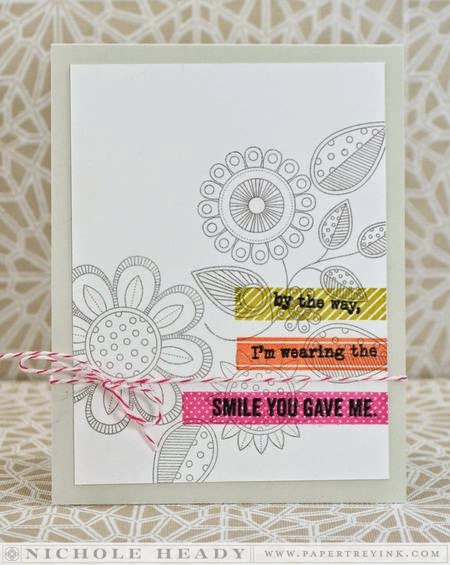 I love the mix of the uncoloured Doodlie-Do with the colourful Building Blocks.

I also made a set of envelopes to match.

Now for a closer look at those cards. 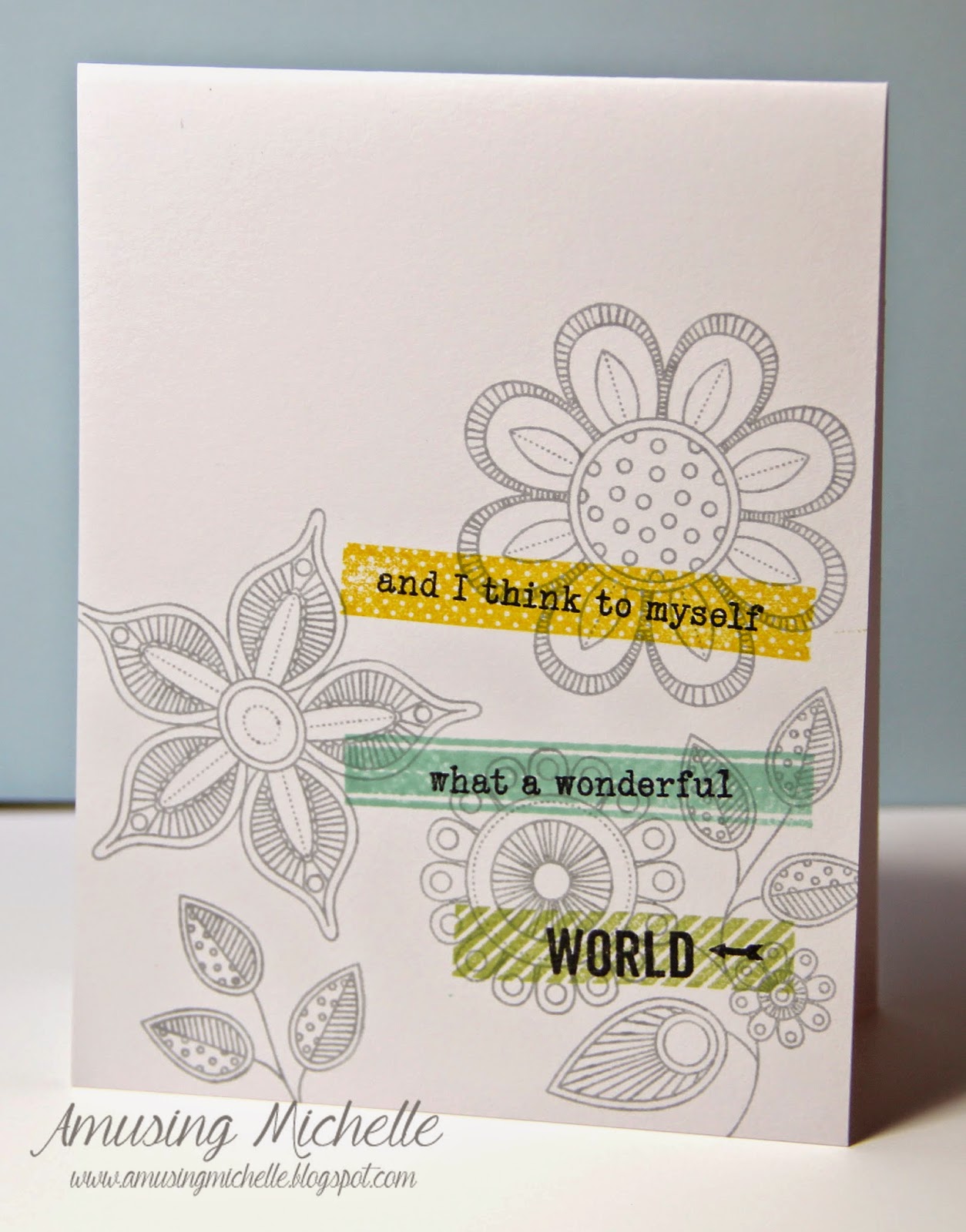 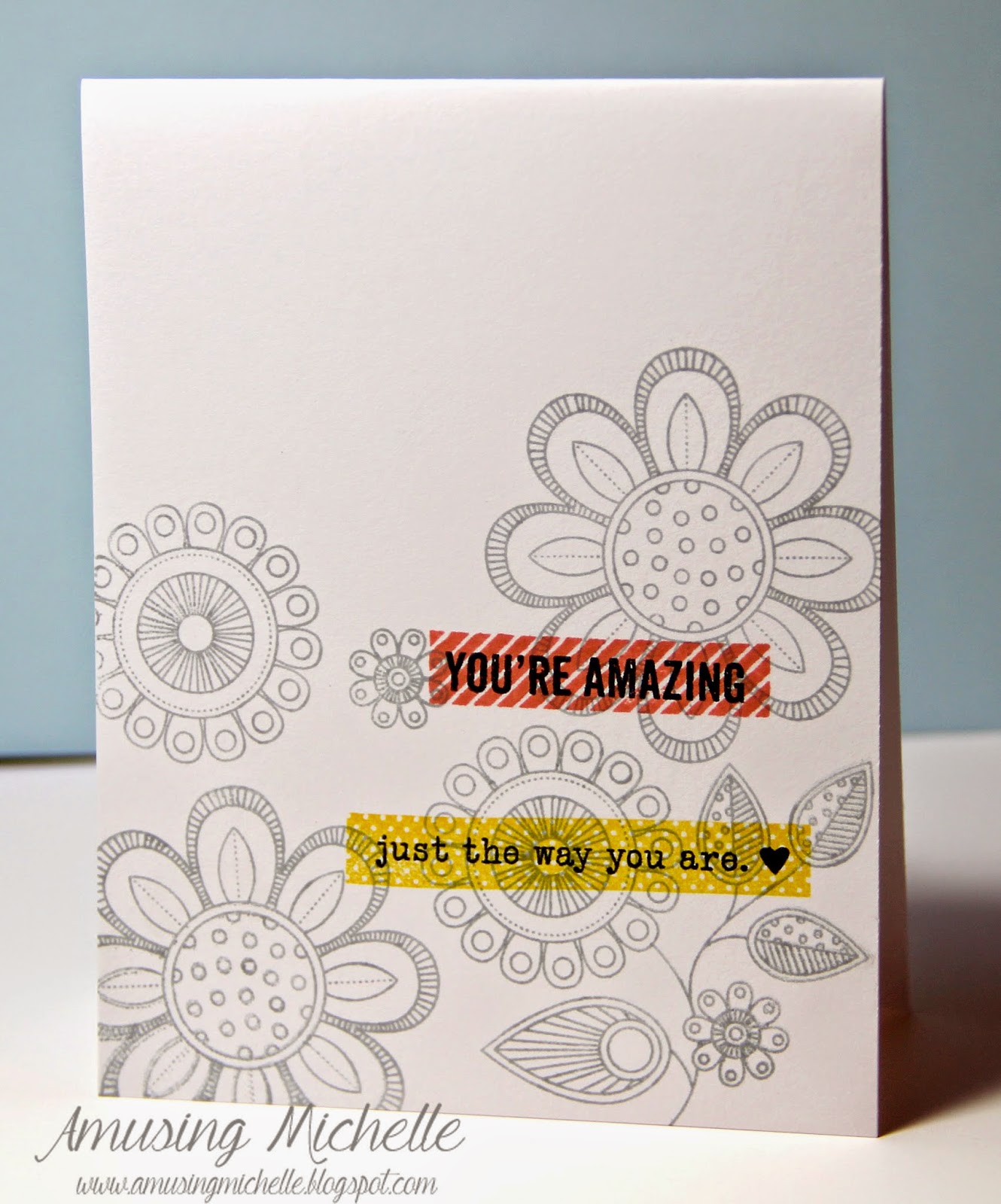 These last two are my favourites from the set. 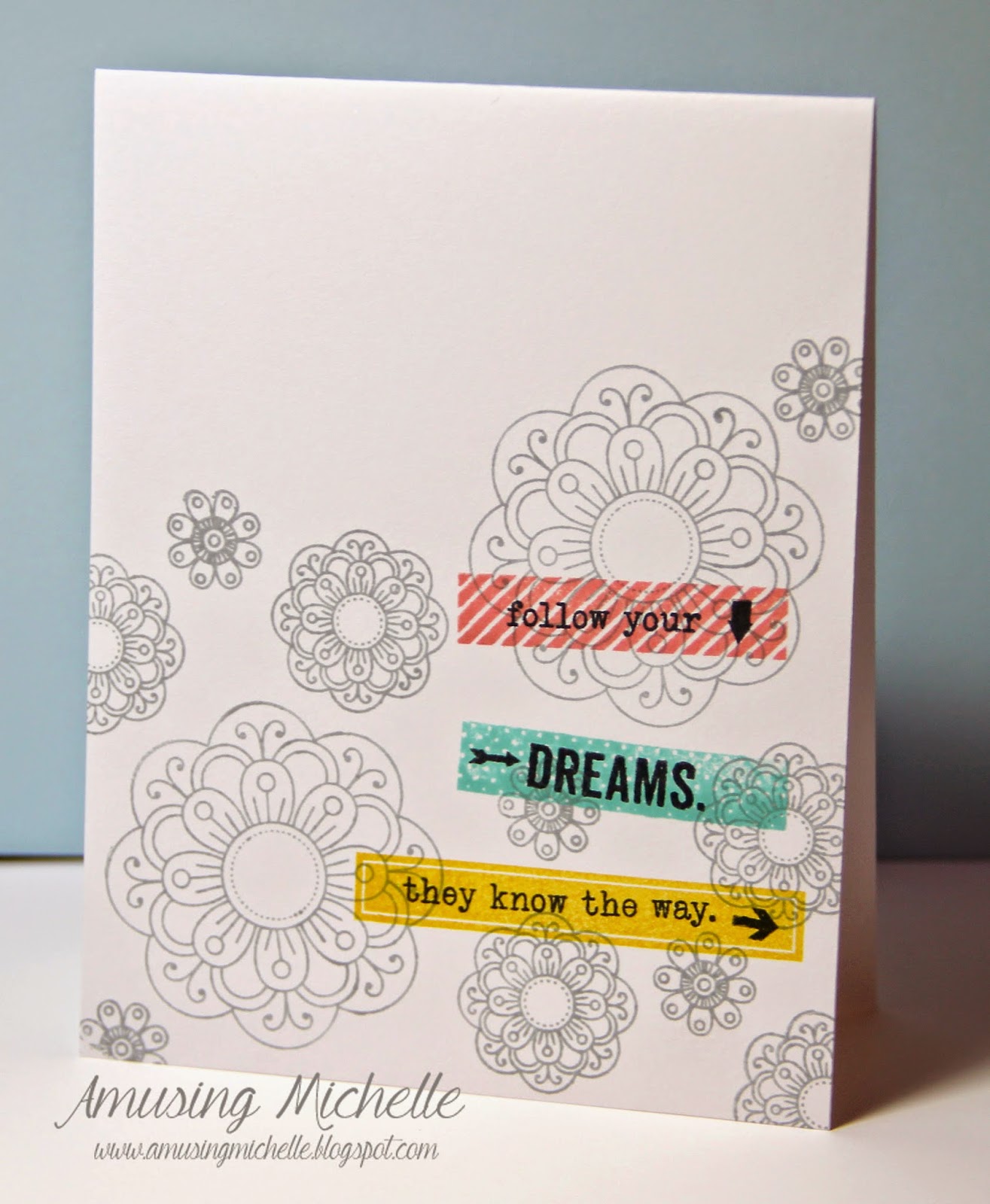 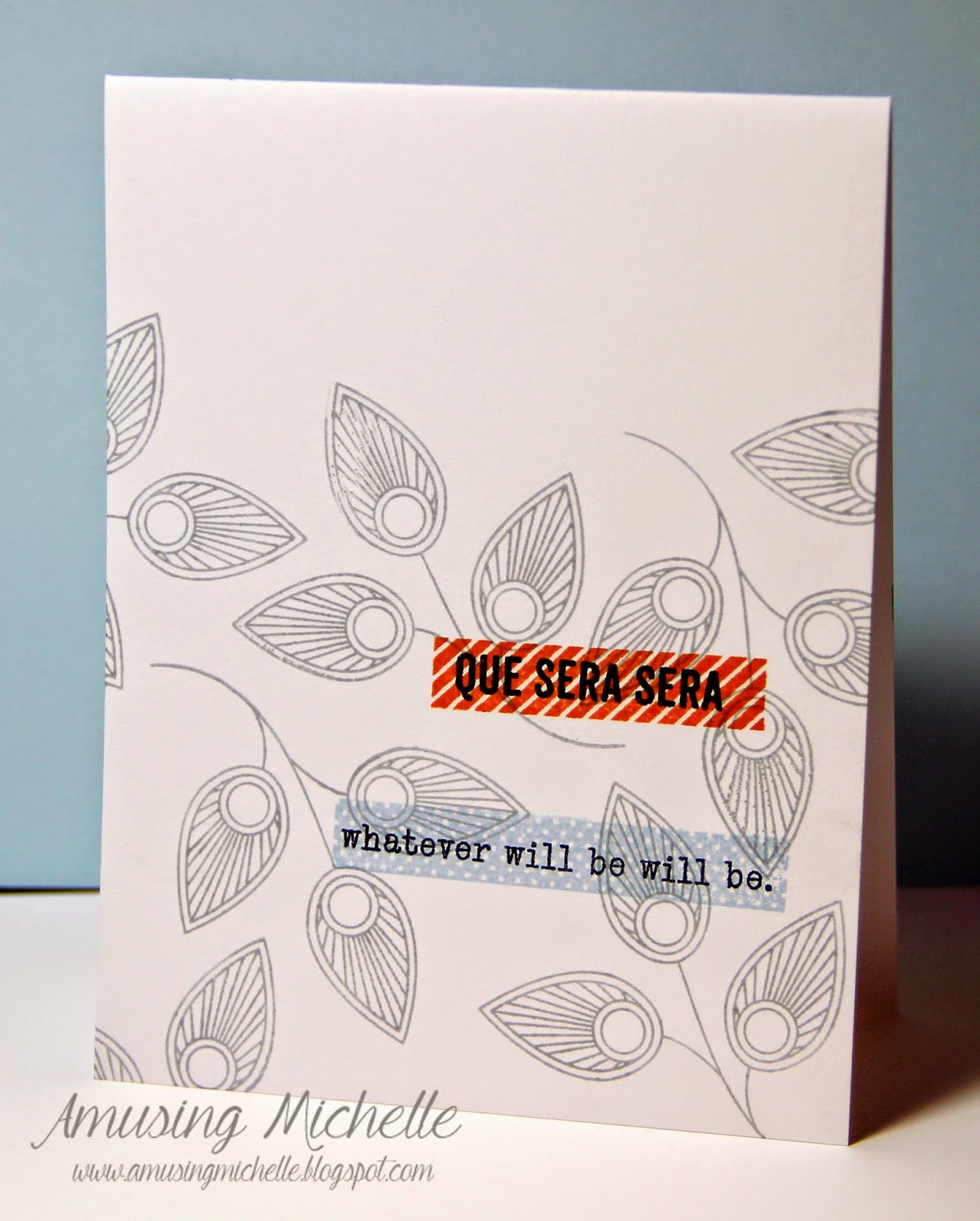 Thank-you for visiting. I'll leave you with a picture of what I found in my laundry yesterday when I wandered downstairs.

Yes, the chickens were being harassed by the magpies again and they decided to come inside the house instead of heading to their coop. They were quite cranky when I shooed them back outside. ;-)  See that feather on the ground? It's amazing. I couldn't capture it's light, airy, fluffiness in a photo, but I tried. 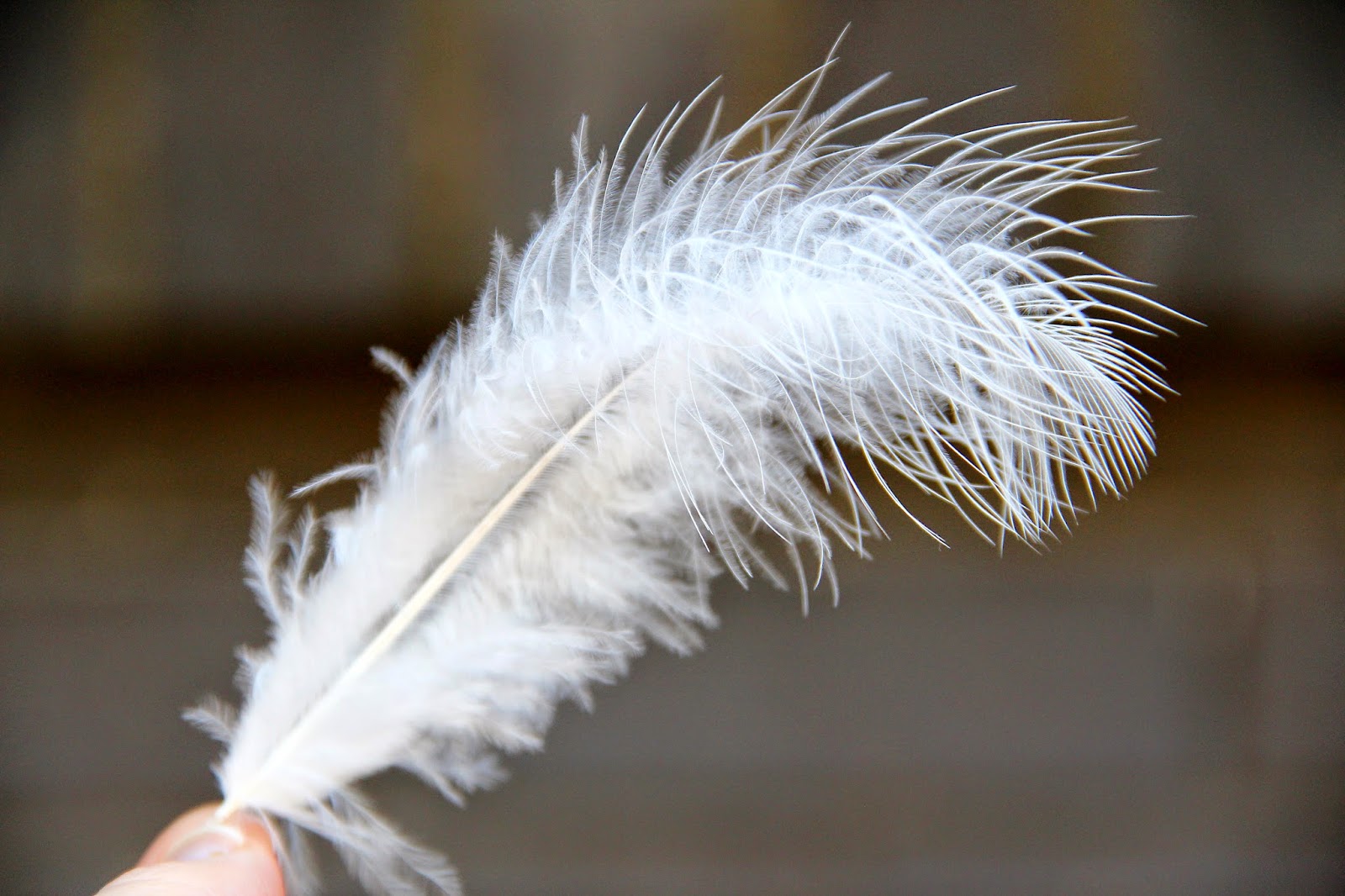 Beautiful set of cards! I always regret not owning Doodlie-Do every time I see it used, one of these days I'll buy it :)

What a gorgeous set of cards Michelle. I love the pops of color against the gray. Truly stunning!

these are so cool!

Oh, these are all so fabulous and fun!

Beautiful CASE of Nichole's card, Michelle! I love that you made them one layer, too!
Thanks for sharing these photos with us :-) And, what a gorgeous feather! Can you preserve it somehow?

You're so right ... making a coordinating set of cards is a great way to explore a set of stamps. Yours here are all so fun and charming! I have to say, I would be completely startled to find chickens in my laundry room : )

These are all gorgeous and don't blame you being inspired by Nichole's card, its a fantastic design! I love the colours you chose and the sentiments are really lovely. I'm sure they will be sold in seconds and for such a worthy charity.

What a fantastic design! Like your cards better. Wouldn't want those chickens in my house, however (although they are actually beautiful!)

The cards and envelopes are great! I just adore you sweet little ladies. I think my husband would flip if ours came inside. Ha ha!

Wow, LOVE this card set. Makes me want to buy this floral set just to make the same thing.