Coco and a Blue Tongue

Not a card related post. Another of my musings on nature, and my doggy Coco.

I was waiting for the warmer weather to arrive before I took Coco in for her Spring grooming. I didn't want her to freeze to death at night time after losing her nice long coat. But things got a bit desperate, the dreadlocks were breeding despite my ongoing battle to brush them out. I'd brush at night and by morning they were starting again, argh!  She was looking totally cute, but was impossible to groom, and her long fur was bringing in every possible piece of debris from the yard (and some impossibly large pieces of debris).  This is pre-haircut: 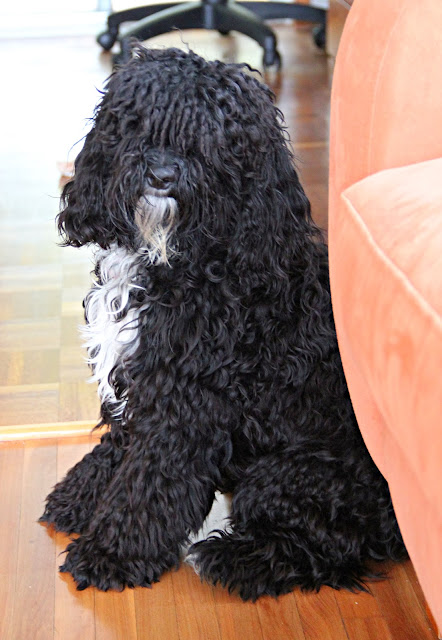 After the haircut, things are better, she can see, she doesn't pick up sticks and stones in her fur, and when she covers herself from head to toe in mud during a thunder storm, she is easy to wash off. . . 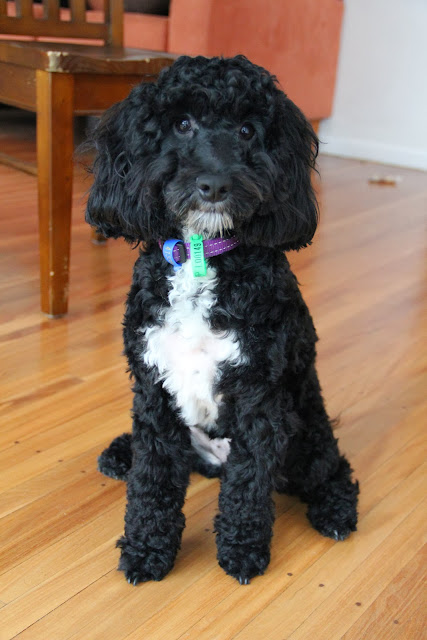 Related to Coco, but not really. . . the other night we had a visitor. This visitor came in during the day through the doggy door. He wanted Coco's breakfast. He guarded that food all day long until we came home from work that night. Even then, he hung on desperately - hissing at us and making the fiercest faces. When we removed the food, he conceeded defeat and walked out the door again. 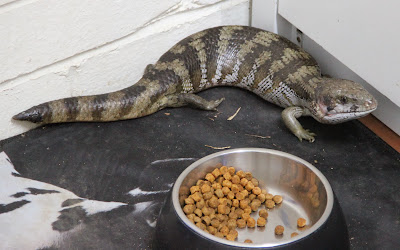 He's an Eastern Blue Tongue Lizard. A very large one. Blue Tongues are the largest of the skink family. They are omnivorous, eating plants and bugs and left-over dog food. They don't belong in laundry rooms. 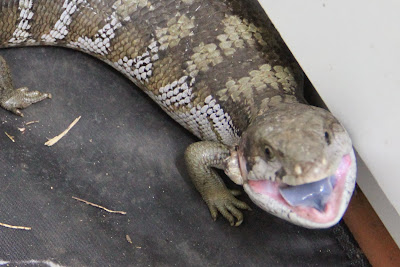 But he's not leaving without a fight. His hiss sounds just like a cat hissing, it is very fierce.

I was told by the kids that Coco found him in the back yard again the next day and was harrassing him.

Yesterday, I heard Coco barking madly. She doesn't bark much, so I went to investigate. There was the poor Blue Tongue hissing away while Coco had a ball trying to get him to play with her. Her tail was wagging, she was jumping up and down, she was doing the "play bow", but he just wouldn't join in.  I took her inside to give him a chance to go somewhere else. He didn't. He liked that spot in the sun at the bottom of the retaining wall.  I decided that if he wouldn't cede his spot, he would just have to learn to share the backyard with a joyful puppy. 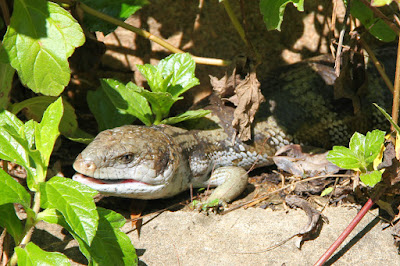 They seem to be getting on just fine.

I love the wildlife in my garden (except the Scrub Turkeys, but that story I'll hold for another day).

One last photo - Coco in her typical "Frog" pose. 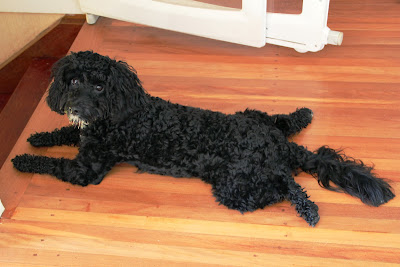 Email ThisBlogThis!Share to TwitterShare to FacebookShare to Pinterest
Labels: Photos

This is hilarious - my dog's name is Coco and she has a lot of the same characteristics! When she's in that "frog" pose we call her proggers... mix of piggy and frogger. She snorts like a pig, sits like a frog. She also does the "play bow"... but we call it "battle stance". Gotta love our silly dogs!

Aww she looks so sweet with her hair trimmed and a right little rascal with it long! I know what you mean about bringing in debris...Rolo does it with the bark chip in the back garden. Awesome garden guest too!
Jenny x